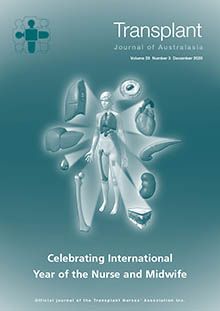 The utilisation of hepatitis C-positive donor livers in Australia

Whilst adult organ donation is widely accepted within the realms of the adult intensive care environment in Australia, paediatric donation appears to be a more reluctant partner. In 2014, the donation specialist nursing coordinators (DSNCs) in South Australia (SA) acknowledged that paediatric donation was a low-frequency event and attempts to source paediatric-specific promotional information proved to be non-existent. A small working party was formed to review the position of paediatric organ donation in Australia and to understand some of the barriers to organ donation in this specialty area. Following a review of available information, it became clear that reasons for the lack of paediatric-specific material is multifactorial and DSNCs could potentially influence these factors and effect change. A question was posed: “Could we promote the unthinkable — that a child may die and donate organs for transplantation?”. This article was the subject of a poster that was presented in 2015 at the 8th Paediatric Symposium of the International Paediatric Transplant Association (IPTA) in San Francisco, USA.

Comparison of liver transplants from DBD donors to DCD donors: a review of the literature

Steadily over recent years, the use of donation after circulatory death (DCD) allografts has increased in an effort to widen the donor pool with an aim of providing life-saving transplants to patients suffering from end-stage liver disease (ESLD). However, the use of DCD livers has led many medical professionals to question its effectiveness while still proclaiming donation after brain death (DBD) livers as superior. The aim of this literature review is to consider and share the current international evidence and clinical opinions about DCD livers to enhance the general knowledge and understanding of local transplant clinicians. It is hoped that this review will aid nursing and medical staff with the necessary information to make important decisions related to donors for the benefit of transplant recipients.

Due to the large number of patients on the waiting list, a relatively low deceased donor rate and a waiting list mortality around 20%, New South Wales (NSW) has been a net importer of donor livers from interstate centres that have declined to use them for various reasons. The Australian National Liver Transplant Unit (ANLTU) at the Royal Prince Alfred hospital (RPA) in Sydney aimed to examine the clinical outcomes of liver transplants using interstate donors where the ‘home’ state had declined them. From 2004 to 2013, a total of 665 livers were transplanted in our centre, of which 98 donor livers were imported from interstate. After excluding urgent, multi-organ, re-transplants, donation after circulatory death (DCD) and paediatric recipients, there were 55 transplants (interstate group) for comparison with 365 recipients (local group) with the same exclusion criteria. The interstate group had longer cold ischaemic times, compared to the local group (hours, 9.12±0.18 vs 7.22±0.18; P<0.0001). The overall quality of donor graft in the interstate group was significantly worse compared to the local group (DRI, 1.97±0.3 vs 1.57±0.4: P<0.0001). No significant difference in graft survival was recorded between the two groups (months, 93±6.5 vs 96±2.8; NS). Three interstate recipients (5.5%) were retransplanted compared to 10 (2.7%) in the local group. The ANLTU found that livers that have been declined by other centres can often be transplantable with comparable graft and patient survival.

Barriers to becoming active on the renal transplant waiting list: have they changed in the last five years?

Organ donation within the intensive care unit: a retrospective audit