What is the best available evidence on the use of tea tree oil preparations in managing chronic wounds?

Tea tree oil is an essential oil traditionally used for its antibacterial and anti-inflammatory properties. Level 5 evidence from bench research1-7 has demonstrated that tea tree oil has activity against bacteria, fungi and viruses. There is minimal evidence exploring the clinical use of tea tree oil in reducing promoting healing in chronic wounds. Level 1 evidence8 demonstrated reduction of MRSA colonisation and improvement in wound assessment scores. Level 3 evidence9 reported reduction in wound size; however, MRSA colonisation did not decrease and most participants required commencement of antibiotic therapy. Level 4 evidence10, 11 reported successful wound bed granulation10 and complete healing10, 11. This limited evidence was insufficient to make a graded recommendation on the use of tea tree oil to promote healing in chronic wounds. However, the studies reported that no adverse events occurred. Tea tree oil products might be used to treat chronic wounds in clinical contexts in which there is no access to contemporary antimicrobial agents.

There is insufficient evidence on the effectiveness of topical tea tree oil products to make a graded recommendation on their use in promoting healing in chronic wounds.

This summary was conducted using methods published by the Joanna Briggs Institute (JBI)12-16. The summary is based on a systematic literature search combining search terms related to chronic wounds with terms related to tea tree oil. Searches were conducted in Embase, Medline, Global Health, and Allied and Complementary Medicine databases, and in the Hinari database for low- and middle-income countries. Evidence published up to July 2021 in English was eligible. Studies were assigned a level of evidence (see Table one) based on JBI’s hierarchy12-16. Recommendations are made based on the body of evidence and are graded according to the system reported by JBI12-16.

Tea tree oil is an essential oil derived from an Australian native plant, Melaleuca alternifolia1, 4, 18. Essential oils are plant-based oils that contain high concentrations of plant extracts. Crushed tea tree leaves were used as a traditional remedy by Aboriginal people, prepared as a poultice for treating skin lesions4, 19. The formulation of contemporary tea tree oil, made by steam distillation of the leaves19, 20, is regulated by international standards that define its chemical composition with respect to 14 primary components7, 21. Most variations of tea tree oil contain over 100 active components.

Tea tree oil preparations are used to treat superficial skin conditions (e.g., insect bites, head lice and dandruff)4, 21 and has been shown to have some efficacy in eradicating methicillin-resistant Staphylococcus aureus (MRSA) in nasal infections22 and topical skin infections23. Topical tea tree oil preparations are also used in wound management, to achieve a range of outcomes including reduction in inflammation, control of local wound infection and to facilitate wound debridement17.

Additional bench research adds to this evidence base, reporting tea tree oil’s efficacy in eradication S. aureus1, 3, 6 and MRSA2, including in samples taken from lower limb wounds6. Minimum inhibitory concentration, which is the lowest concentration of an antimicrobial that will inhibit the growth of microorganisms, is reported as between 0.2%6 and 0.5%2. One in vitro study demonstrated that tea tree oil formulations maintained adequate antimicrobial activity when combined with alcohol and surfactants3 (Level 5).

An animal study also provided evidence that application of tea tree oil to an acute wound could improve stages of wound healing4 (Level 5).

The evidence on tea tree oil for promoting chronic wound healing comes from small trials that primarily used low level research designs and were at a moderate-to-high risk of bias. A summary of the studies is presented in Table two. 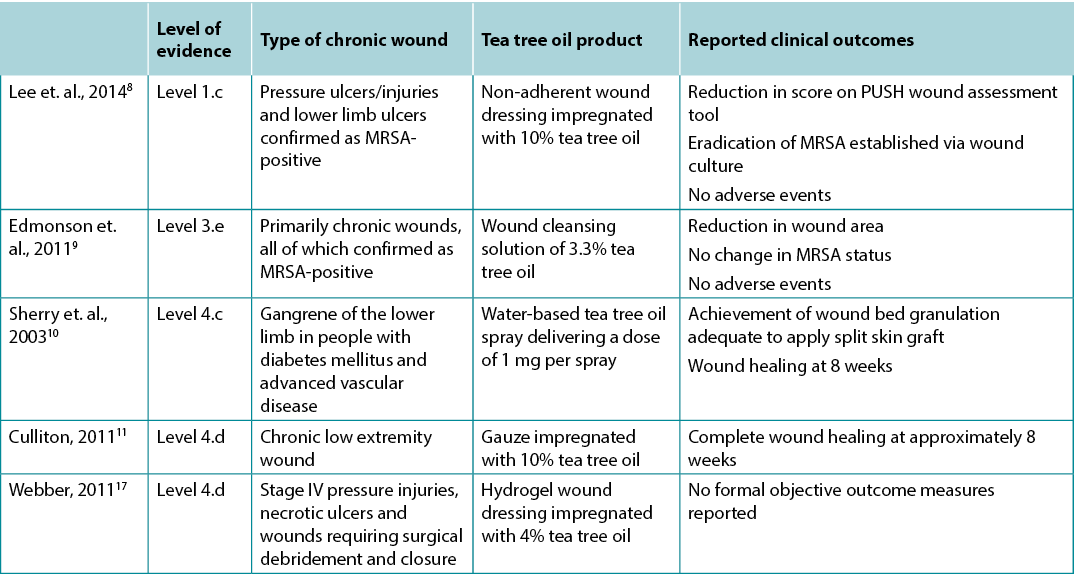 In an RCT (n = 32)8, people with chronic wounds confirmed via wound culture to be MRSA positive8 received either a wound dressing impregnated with 10% tea tree oil or a control non-adherent wound dressing. Analysis of weekly wound cultures showed statistically significantly (p < 0.01) lower viable counts of MRSA associated with tea tree oil treatment from week one to final analysis four weeks after commencing treatment. Complete eradication of MRSA was achieved by week four of treatment for 87.5% of wounds. There was also a statistically significant difference (p < 0.001) in weekly scores on the PUSH wound assessment tool, favouring the tea tree oil group8 (Level 1).

In an uncontrolled pilot trial (n = 12)9, people with wounds confirmed as being MRSA-colonised but not showing clinical signs and symptoms of local wound infection were selected for treatment with a tea tree oil wound cleansing solution. Participants were withdrawn from the study if they subsequently required antibiotic therapy. All the wounds in the study remained MRSA-colonised at the time of trial completion (n = 2) or withdrawal (n = 10). However, 66.7% of wounds had a reduction in wound area at the time of withdrawal from the study compared to baseline9 (Level 3).

In a case series analysis (n = 10)10, gangrenous lower limb wounds were treated with tea tree oil applied as a spray three times daily. Treatment was initially administered until the wound bed was granulating and appropriate for application of a split skin graft. In 100% of wounds, granulation occurred within 2 to 3 weeks, achieving a clinical condition appropriate for grafting. Tea tree oil treatment continued for 1 to 2 weeks following grafting. Complete wound healing was achieved within eight weeks for 100% of wounds10 (Level 4).

In a report of three case studies17, a hydrogel dressing impregnated with 4% tea tree oil was used to treat chronic wounds. Wound dressings were changed every 1—5 days based on wound depth. All wounds were described as healing well when the patient was discharged. The lack of formal outcome measure reporting and the use of a range of concurrent wound treatments prevented conclusions being made about the efficacy of tea tree oil in this report17 (Level 4). Another report on a single case study11 described progression to complete wound healing over a period of approximately eight weeks for a lower limb wound that had been assessed as requiring amputation. Tea tree oil-soaked gauze dressings were applied daily until complete epithelialisation was achieved11 (Level 4).

WHAM evidence summaries are consistent with methodology published in: 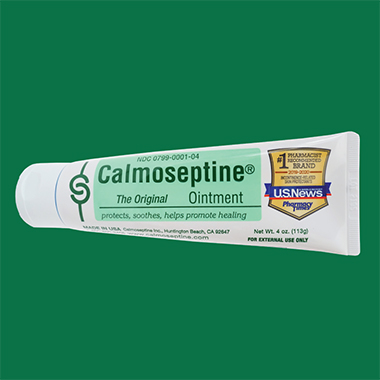