This case study summarises the nursing experience of a patient with grade III hand foot syndrome (HFS) caused by the oral anti-tumour drug Xeloda. The key points of nursing were a multi-disciplinary team consultation to make a clear diagnosis of grade III HFS, effectively control infection, apply a biocellulose dressing, and promote granulation growth and epidermal cell regeneration on the premise that the anti-tumour drug Xeloda cannot be reduced or stopped. After 98 days of comprehensive nursing intervention the wound healed completely; 6 months later, the ulcer did not reoccur.

This case study will summarise the nursing experience of caring for a patient with grade III hand foot syndrome (HFS) caused by the oral anti-tumour drug Xeloda (Capecitabine). The key points of nursing care are the importance of a multi-disciplinary team (MDT) consultation process to provide a definitive diagnosis of a grade III HFS, effectively control infection and apply a biocellulose dressing to the wound to promote the growth of granulation tissue and epidermal cell regeneration on the premise that the anti-tumour drug Xeloda could not be reduced or stopped. After 98 days of comprehensive nursing interventions, the wound had healed completely; 6 months later, the ulcer had not re-occurred.

HFS is also known as palmar-plantar erythrodysesthesia, syndrome, acral erythema and Burgdorf’s syndrome. It is an adverse dermatologic skin reaction that may occur in patients with malignant tumours during treatments with systemic chemotherapy or molecular targeted therapy1–3. Localised tissue injury occurs as a result of a toxic reaction caused by drug accumulation from damage to the eccrine gland system. Further, the drugs used are excreted in sweat in the terminal limb capillaries of the palms of the hand and soles of the feet, making these areas more susceptible to HFS. The vascularity of and increased pressures and skin temperature of the hands and feet may exacerbate this effect2,4. While HFS is not life-threatening, it may severely impact a person’s quality of life, especially older people3. The clinical manifestations of HFS are palmoplantar numbness, insensitivity, a tingling sensation, rapid skin swelling or erythema, desquamation, skin cracking or blisters (usually advanced stage) or severe pain3,5. The palms of the hands are usually affected first. There may be progressive aggravations of any skin lesions.

It is important the HFS is not mistaken for hand-foot skin reaction (HFSR) arising from the use of multikinase or BRAF inhibitors. Skin reactions from the use of these groups of drugs manifest as yellowish, painful hyperkeratotic plaques on the heels, fingertips, within interdigital web spaces and over joints3.

According to National Cancer Institute (NCI)6, HFS is divided into three grades: grade I is dermatitis with skin changes (such as fingerprint disappearance, pigmentation, erythema, skin numbness, insensitivity, paresthesia, desquamation, etc.) with or without pain; grade II is skin change or dermatitis, with pain but without dysfunction; grade III is skin change or dermatitis (such as skin wet desquamation, ulcer, blister), severe pain and dysfunction. Grade III severe ulcers are rare. The pathological manifestations of grade III ulcers are vacuolar degeneration (liquefaction) of basal keratinocytes, infiltration of lymphocytes around skin vessels, apoptosis of keratinocytes and skin oedema7. The Xeloda antithetical couplet named capecitabine tablets, the new generation of oral fluorouracil broad spectrum anti-tumour drugs8, is used for the treatment of advanced breast cancer patients after chemotherapy; tumour cells can be intentionally killed if Xeloda is used independently. Xeloda can also be used in conjunction with other chemotherapy agents9. Further, Xeloda is usually taken orally BD after food and in cases of metastatic breast cancer Xeloda is used for maintenance therapy as long as it remains effective. Adverse reactions to Xeloda mainly include HFS, nausea, diarrhoea and neutropenia. The incidence of HFS is the highest among the adverse reactions to Xeloda, reaching 45–68%8. Furthermore, 20–50% of the patients who used Xeloda were forced to reduce the dosage or even discontinue treatment due to HFS10,11.

On 26 May 2020, a patient with severe grade III HFS caused by oral Xeloda was admitted to our hospital’s specialist nursing clinic of wound ostomy incontinence. Without stopping the drug, the wound was completely healed in 98 days after comprehensive nursing and medical intervention. The nursing methods are reported as follows.

A 65-year-old female patient, Ms Li, presented with a history of desquamation and skin peeling of the palms of both hands and the soles of both feet, inflamed dermatitis and occasional blisters for 3 years, and an ulcer on the right heel for 2 months. Her skin conditions and wounds were not healed by moist wound healing methods in two grade III, class A hospitals in the province.

Her past medical history included being diagnosed 13 years ago with breast cancer. Further, axillary lymph node metastasis and bilateral lung metastasis occurred 4 years ago. After six courses of chemotherapy, Xeloda 1.5g BID was taken orally as targeted therapy, and the disease did not progress. After oral administration of Xeloda for 2 weeks, grade I and II HFS appeared, such as dry hands and feet and desquamation.

A systemic evaluation of Ms Li included the following reviews: 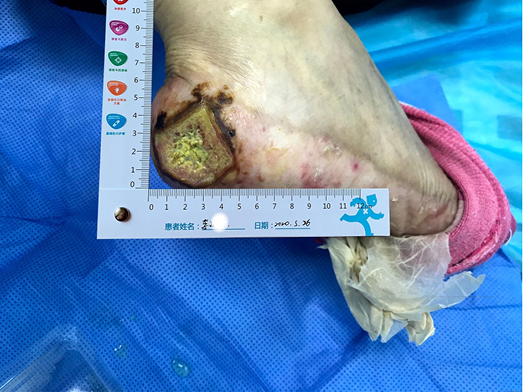 Figure 1. The wound on presentation

From a nursing perspective there were a number of difficulties encountered and challenges to be overcome. These included:

Due to the above nursing assessment and nursing difficulties, a multidisciplinary team (MDT) consultation, including the general surgeon, oncologist and wound care nurse, was quickly convened. Representatives from the relevant departments of the hospital were invited to formulate a diagnosis and treatment plan. The general surgery department suggested that pathology and bacterial culture should be undertaken. The results showed there were dense perivascular and interstitial neutrophilic infiltration of the tissue. However, there were no signs of vasculitis or malignant tumour. The bacteria cultured were identified as Proteus. The diagnosis of grade III HFS with rare severe ulcer was confirmed. Post oncology consultation, the oncologist’s opinion was that, considering the recurrence of breast cancer after 4 years, double lung metastasis as well as multiple unstable tumour markers, oral Xeloda could not be reduced or stopped.

The initial goals of wound management were to control infection, promote autolysis of and debride non-viable tissue when required, and to relieve pain. The principles of TIME (Tissue, Infection, Moisture, Exudate) were used to guide local wound management and manage the characteristics of the wound described above. Normal saline and gauze was used to clean and mechanically debride the wound bed. Considering the moderate amount of wound exudate, and dry skin at the edge and around the wound, a sulfadiazine silver lipid hydrocolloid dressing was selected as the primary contact layer to control infection and keep the wound moist. The function of this dressing is to reduce the bacterial burden within the wound and control infection, assist with autolysis and debridement, and reduce pain during dressing changes12. The skin around the wound was dry and partly desquamated. In order to prevent avulsion, a soft silicone foam dressing was used as the secondary or external dressing, which also absorbed the exudate vertically and protected the fragile peri-wound skin.

After using the sulfadiazine silver lipid hydrocolloid dressing from 26 May to 4 June, the localised infection was controlled. Autolysis of non-viable tissue via the dressing product in conjunction with mechanical debridement had occurred, leaving the wound bed with 100% granulation tissue. The wound edge retained a little dip and within the peri-wound skin part of the epidermis was still exfoliated (Figure 2). The amount of wound exudate remained moderate but the odour had disappeared. Dressing pain was reduced. The size of the wound bed was reduced from 5x5cm to 4.5x4.5cm (Figures 3 & 4). The NRS score was reduced to 6 points, and the patient could be helped by her family to come to the clinic for dressing changes. 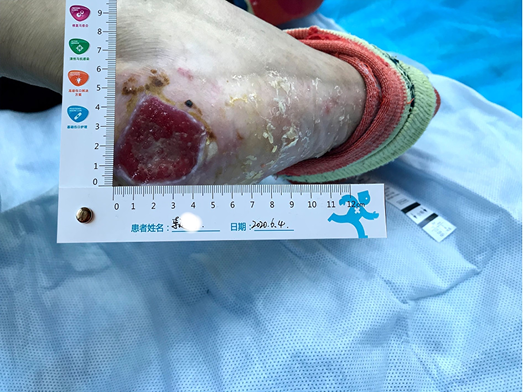 After the wound infection was controlled and non-viable tissue was removed from the wound bed, the sulfadiazine silver lipid hydrocolloid was stopped and the treatment plan was changed. After considering the delays in wound healing that had occurred over a 2-month period within other hospitals plus our hospital, consideration was given as to what other auxiliary wound management products could be used to promote granulation tissue and epidermal cell regeneration to facilitate wound closure of this chronic wound. Therefore, to guide selection of another primary dressing, the MDT considered the factors under ‘S’ in the acronym MOIST. MOIST was developed as an adjunct to TIME to cater for the development of new wound technologies. MOIST refers to ‘M’ Moisture balance; ‘O’ Oxygen balance; ‘I’ Infection control; ‘S’ Support and ‘T’ Tissue management13. The S refers to modification of the wound environment e.g. inflammatory mediators, pH levels and growth factors. Consequently, a biocellulose wound dressing (Nanoderm® from China Shandong Nameide Biotechnology) was selected. This is a natural biomaterial which is safe and non-stimulating for tumour growth within cancer patients and can effectively promote granulation tissue and epidermal cell regeneration. A soft silicone foam dressing was chosen for the secondary/external dressing.

After dressing changes every 3–4 days, the granulation tissue increased and the size of the wound gradually reduced. By 11 August, the wound had narrowed to 1.5x1.5cm and entered the epithelialisation stage (Figure 5). The primary biocellulose wound dressing was discontinued. The skin around the wound was fragile and so the soft silicone foam dressing was still used. At this time, the NRS score was 2, and the patient could come to the hospital for dressing changes. After almost 3 months’ treatment, the wound had healed completely on 31 August (Figure 6). At follow-up 6 months later, the patient’s ulcer had not re-ocurred. In order to express her gratitude, the patient specifically came to the clinic and said that she had recovered her state of health to that of 4 years ago and had returned to a normal life that included square dancing. 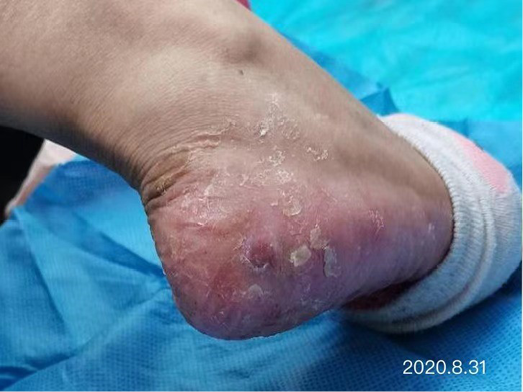 Many articles were searched for the best evidence to assist with the management of this case. In terms of systemic therapy, Xeloda-targeted therapy combined with high-dose vitamin B6 (300mg/d) and Vit E cream for both hands and feet can reduce the severity of HFS14. Nearly half of the patients treated thought that HFS is the most serious side effect of chemotherapy received, which has a serious impact on the confidence and compliance of treatment. It is important to provide patients who will receive Xeloda therapy relevant knowledge of the benefits and side effects of the treatment and health guidance to manage any adverse effects. Having sufficient psychological preparation may assist patients to overcome the underlying disease and any treatment related side effects. The effective management of chronic wounds is enhanced through a MTD approach to determine the cause of the wound and factors that may complicate wound healing, and to determine evidence-based wound management strategies to facilitate wound healing and improve patients’ quality of life15.

HFS with severe skin ulcers is very rare. When Xeloda is unable to be reduced or stopped, the wound is difficult to heal. This presents great challenges to wound specialist nurses in determining wound management strategies. In this case, through MDT consultation and wound specialist nurse evaluation of the patient, the wound and systemic treatments, the wound infection was controlled using a sulfadiazine silver lipid hydrocolloid dressing, and a biocellulose dressing was applied to effectively promote granulation tissue and epidermal cell regeneration. In this case the treatment of primary disease was not affected, the patient’s pain was minimised, and wound healing realised.