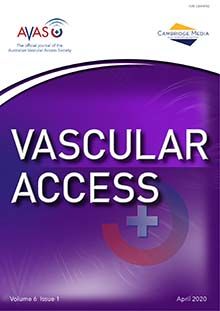 Message from the President

From the Editor’s view

Difficult vascular access in hospitalised patients: delays to treatment, cannulation attempts, and use of ultrasound

Method Over the period 1 January 2017 to 31 July 2018, data were collected prospectively by the CTC team using a portable tablet and a custom-made database. Clinical Team Coordinator nurses categorised the activity and data as the time of callout, reason for PIVC, patient characteristics, number of PIVC attempts prior to call-out, CTC attempts, and delay in treatment. All entries marked as ultrasound cannulation assists were extracted and summarised in Excel.

Results During the period, 208 callouts were made for ultrasound cannulation assistance. Nearly half (n=95) of patients had undergone three or more previous cannulation attempts prior to the call-out. In 72% of cases (n=151), the CTC team members required just one attempt at cannulation and 93% (n=195) of all cases were completed with one or two CTC attempts. Treatment delay (the time between PIVC access being required and the eventual establishment of access by the CTC team member) was kept under 1 hour in 40% (n=84) of cases. However, 11% of the cases (n=22) had a 6-hour or greater delay in treatment. The most common reason for PIVC access was for administration of intravenous (IV) antibiotics.

Conclusion Many patients require multiple attempts at cannulation, which are associated with patient discomfort and treatment delays. The availability of a nurse-led ultrasound-guided PIVC team, and increasing ward staff’s knowledge and skills on predicting cannulation difficulty, may improve patients’ cannulation experiences.

The benefit of a vascular access specialist placing a peripheral intravenous catheter: a narrative review of the literature

Background Peripheral intravenous catheters (PIVCs) are a quick, effective means to gain access to a patient’s vasculature for the delivery of intravenous treatment. Although a frequently performed procedure, the skill and training for clinical staff to successfully place these catheters is often underestimated, with up to 50% of insertions requiring multiple attempts prior to successful placement.

Methods A narrative review of studies describing the benefit of vascular access specialists (VAS) inserting PIVCs was undertaken. A detailed literature search was conducted in the Cochrane Central Register of Controlled Trials (CENTRAL), PubMed, and EMBASE, on 30 November 2018. The methodological rigour of included studies was assessed as per the Mixed Methods Appraisal Tool (MMAT).

Results The search generated 708 records. Once titles, abstracts and reference lists were screened, 10 studies were included in this review. Six studies compared a VAS team with insertion by other health professionals; four examined outcome improvements within their own VAS team. Outcomes considered included: PIVC failure; phlebitis; PIVC-related infection; and first-time insertion success. All included studies described positive VAS team outcomes; however, methods and results reporting varied greatly in outcome assessment and quality. Overall, the quality assessment of included studies (using the MMAT) was low, with 68% of criteria items scoring ‘not reported’ or unclear.

Objective Complication rates from peripherally inserted central catheters (PICC) insertions are reportedly high. The aim of this study is to report positive patient outcomes from a nurse-led PICC insertion team.

Methods We conducted a retrospective analysis of consecutive adults that had a PICC line inserted between 1 January and 31 December 2017. The study examined the prevalence of major complications – catheter-related bloodstream infection (CRBSI) and catheter-related deep vein thrombosis (CRDVT).

Introduction Peripheral intravenous catheters (PIVCs) are essential for administration of intravenous fluids and medications. While patient need for PIVCs is high, up to 69% fail due to complications such as occlusion and infiltration. Midline catheters (MCs) are an alternative to PIVCs; they are 8–20cms in length and terminate at, or are distal to, the axillary vein, not in the central venous circulation. Midline catheters’ rising popularity is due to concerns that patients’ veins are depleted by multiple consecutive PIVCs. However, there have been no randomised controlled trials (RCTs) comparing these devices to guide practice.

Methods and analysis This single centre, parallel group, pilot RCT is designed to compare effectiveness of MCs with PIVCs for patients with difficult vascular access (≤2 visible and palpable veins) and/or receiving peripherally compatible intravenous therapy for ≥5 days. This trial will be conducted at the Royal Brisbane and Women’s Hospital, Australia. The recruitment target is 70 participants per group (n=140). There are three primary outcomes of interest to test: 1) Feasibility of an adequately powered RCT with pre-established criteria for eligibility, recruitment, protocol adherence and retention; 2) Insertion failure (number of PIVCs/MCs unable to be inserted); and 3) Post-insertion failure: all-cause failure. Secondary outcomes to be collected include: number of insertion attempts; time to insert; catheter dwell time; costs (staff time/equipment); patient-reported insertion pain; and individual causes of failure, e.g. phlebitis. Feasibility outcomes will be reported descriptively and analysed against pre-determined acceptability criteria. As a pilot study, statistical comparison methods will be tested. Cox regression will assess the effect of patient and treatment differences.