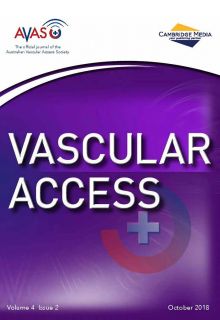 Letter from the AVAS President

Introduction
Research has quantified the unacceptably high failure rate of peripheral intravenous catheters (PIVCs) prior to completion of prescribed treatment. Surveys and audits have highlighted inconsistencies in reported practice and guidelines.

Aim
The aim of this study was to gain a ‘real world’ overview of nurses’ intravenous (IV) flushing and medication practice, and compare this to current practice recommendations.

Method
This was a single-centre, prospective observational study of IV flush and medication administration by nurses over a range of times on surgical and medical wards of a tertiary metropolitan hospital.

Conclusion
Mixed forms of drug delivery were observed, with use of single bags predominating. This has implications for healthcare costs and infection control. Flushing practice was consistent for bolus delivery but inconsistent for bag and burette delivery. Adherence to hand hygiene and ANTT was also suboptimal. The limited studies on flushing practices to date are inhibiting recognition of this important patient quality and safety issue. Practice and guidelines need to be consistent with current best practice recommendations. Future studies need to minimise practice variation in trial protocol and/or acknowledge and account for varied practice with analysis.

Intravascular catheters (IVCs) are one of the most frequently used medical devices in hospitals. However, these catheters are associated with serious IVC-related bloodstream infection (IVC-BSI), which causes high mortality and additional costs. The IVC provides surfaces for microorganisms to attach, grow and form a biofilm with the subsequent shedding or dispersion of microorganisms leading to IVC-BSI. Furthermore, microorganisms within biofilms are highly resistant to a number of antimicrobial agents. In order to prevent IVC-BSI, it is important to understand the mechanism of biofilm formation and resistance. This review provides a brief introduction of the biofilm formation on IVCs and their roles in antibiotic resistance and IVC-BSI.

Introduction: Peripherally inserted central catheters (PICC) are integral to the treatment of acute and chronic illness. Yet premature device failure occurs in approximately 30% of cases, causing interruptions to treatment that can be life-threatening. PICCs manufactured with specific compounds (such as Endexo™ technology) claim to prevent thrombosis (blood clots) and infections by reducing microbial and blood product attachment. To date, no large randomised controlled trial (RCT) has sufficiently assessed the impact of this technology on reducing PICC complication and failure.
Methods and analysis: This is a multi-centre parallel group, pragmatic pilot study to assess the feasibility of a definitive RCT comparing the effectiveness of the BioFlo™ with Endexo™ technology PICC in a tertiary paediatric and adult facility. The pilot study commenced in January 2016 at the Lady Cilento Children’s Hospital, Brisbane, Australia; and is soon to commence at the Royal Brisbane and Women’s Hospital, Brisbane, Australia. Recruitment and random allocation of 220 participants will occur over two years, allowing for a staggered start between both pilot sites. Primary outcomes will be study feasibility, measured by eligibility, recruitment, retention, attrition, missing data, cost, parent/patient/staff satisfaction, and effect size. PICC failure and complication (thrombosis, occlusion, catheter-associated bloodstream infection, local infection, dislodgement and fracture) will be compared between intervention and control groups. Relative incidence rates of PICC failure per 100 devices and per 1,000 PICC days (with 95% confidence intervals) in each trial arm will summarise treatment impact. Kaplan-Meier survival curves will compare failure rates over time.
Ethics and dissemination: Ethical approval was gained from Queensland Health (HREC/15/QRCH/164) and Griffith University (2016/077). Results will be published according to the CONSORT statement.
Trial registration: ACTRN12615001290583 and ACTRN12616001578493.

Evaluation of intravenous administration practices, patient safety and expenditure on saline products in a tertiary hospital

A drug expenditures review revealed intravenous saline as the largest pharmacy net expense. With 100 mL saline intravenous fluid expense disproportionate to other products, a procedure to use 1000 mL saline bags as a continuous infusion was implemented. Savings of over $100,000 per year were realised, with no demonstrated patient harm.