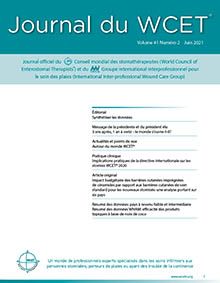 From the President and President-Elect

The second edition of the WCET® International Ostomy Guideline (IOG) was launched in December 2020 as an update to the original guideline published in 2014. The purpose of this article is to introduce the 15 recommendations covering four key arenas (education, holistic aspects, and pre- and postoperative care) and summarise key concepts for clinicians to customise for translation into their practice. The article also includes information about the impact of the novel coronavirus 2019 on ostomy care.

Introduction In a randomised controlled study, the use of ceramide-infused skin barriers (CIB) resulted in lower costs of care over 12 weeks versus using a standard of care (SoC) skin barrier. However, the degree to which this information may influence prescribing patterns of ostomy products, and its corresponding impact on payers’ budgets, has not been examined.

Purpose To examine expected budget impact of CIB among recent ostomates in the United States (US), the United Kingdom (UK), Sweden, Australia, Italy and Norway.

Methods Total ostomy-related costs (i.e., skin barriers, ostomy accessories, care of peristomal skin complications [PSC]) were forecasted over 1 year for hypothetical cohorts of recent ostomates in each country of interest. Costs were assessed under two alternative scenarios – one in which all patients were assumed to use barriers other than CIB (the SoC scenario), and one in which 20% of patients were assumed to use CIB in lieu of SoC (the CIB scenario). The budget impact was assumed equal to the difference in these two scenarios.

Findings The use of CIB was expected to result in annual savings of US$6.6m in the US, £0.4m in the UK, SEK1.8m in Sweden, A$0.4m in Australia, €0.2m in Italy and NOK1.5m in Norway. Findings were consistent in sensitivity analyses.

Conclusions The use of CIB versus other barriers results in expected lower costs to the payers in each evaluated country. Further research is needed to better understand the complete clinical and economic benefits associated with the use of CIB.